The gift of guidance

When I learned animal communication, I was told by senior communicators and my teachers that animals come to our lives for a reason.

Over the years I observed that, yes, many times, animals are sent to their “owners” to guide them, heal them, help them or just be a good company.

The best example of this might be Bob the street cat, who became the star of a book and a movie.

James Owen, a busker (street musician) living in London, battling drug addiction, found Bob in 2007. Bob was injured and James had to nurse him back to health. James said that, having to take care of another being obliged him to straight up.  Bob started following James, every single day and one day, he got in the bus with him and went to Covent Garden, where James used to play.  Bob and James became an inseparable pair and suddenly, the passersby started paying attention to James and Bob, asking questions and listening to James’ story. “I was not invisible, anymore.” At the time, James was in the Methadone program, having to go to the chemist and taking the methadone; “I did not have freedom of choice and, at the same time, I had to take care of Bob and myself.” He could never imagine that Bob would be buying him a house on the south of London and that they would be making a movie about the pair. He wrote a book about their relationship. The book became a best seller and then a blockbuster movie.

James says in every interview, that Bob changed his life. James is very aware that he owns everything to Bob. 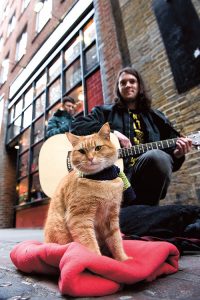 Animal Communicator Sharon Callahan believes that: “Masters beings take the forms of companion animals to assist people through time of rapid spiritual expansion. These beings often come into incarnations for specific reasons and when their task is complete, they simply leave.”

The concept of Dharma, mentioned in the “Yoga Sutras” by Patanjali specifies that all of us have missions in our many lives. It seems that only animals are fully conscious of that.

I had numerous talks with animals that came to this life to help people; sometimes, they cannot finish their mission and then leave, but another animal will come to continue guiding the human. I met animals who healed, who could feel bad energies around the place or people who befriended their family. Some animals, through animal communication, gave advice to their family and guided them on making decisions.

One of the most remarkable clients that I had was C.M and her mare Fluffy.  This remarkable woman, who was capable of understanding her mare’s mission of guidance said:” She helped me and many other people in so many ways that friends call her The Queen”. The mare helped her “human” overcome fear, depression and rage. C had been diagnosed with 7 kinds of anxiety and clinical depression and now, she is off ALL medicine besides having lost almost 100 lbs.

Fluffy had helped other people, as well: a grieving husband who lost his wife of 30 years, a brain surgery patient, children, a man going through a divorce and many others. “The brain surgery patient was a horsewoman who was told that she could never ride again showed such improvement after being led around on her that her surgeons cleared her to get her own horse.” Says C; “she has taught countless children to ride. One shy boy terrified of horses, ran through a herd of horses to get to her and hug her, and then spent two days here so he could ride and brush her. A man going through a divorce held onto her and talked to her then collapsed in tears in the barn; he said she was magical and helped him feel so much better. So she had not just helped me but many many others, she is a true gift from God.” 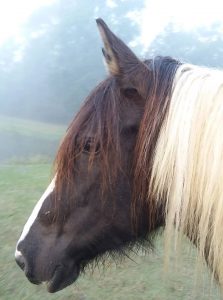 Fluffy, indeed, feels like an old soul with a huge heart.

Upon connecting to the mare, I could feel her altruism towards her fellow humans and her compassion towards the whole world. She had put her own happiness aside so she could fulfill her life mission of guidance, better. She loves helping and guiding people. She knows of a future world without suffering and aggression, without victims and aggressors. Mother Nature is her friend, she confides in her. She gave her life to help everybody; it is her Dharma, as some people would say.

Their testimony was taken during a friendly competition in a group where I donate my time as an Animal Communicator. I was dismayed at the low number of testimonies that I got with the theme:” My animal guides/helps me”. I naively believed that every animal “owner” understood and communicated a bit with their animals, but it seems it is not so.  I myself, many times, have changed my plans to accommodate my cats or I have listened to their wish. I have cut completely night-outings, just to stay with them and meditate and I have cut on traveling to not leave them alone, anymore. I ma not saying that every animal “carer” should become a recluse, but our animals are living with us for a very important reason and should be given a bit of our time and understanding.

My male cat, Kostakis, chooses the holistic seminars I should take and the female, Cecile, convinced me not to adopt other cats. Both warn me of coming earthquakes or bad weather.  I had the feeling that all animal owners/families do listen to their animals but I found out, during my animal communicator career that that is not so. Many people believe their animals are : lazy, stubborn, difficult, etc… Whenever I contact the animals, they are just trying to get a message across to “their humans”.

Many humans have real “life treasures beings” in their homes but assume that animals cannot think nor speak and decide to ignore them. My wish is that more humans start listening to their animals, opening their hearts to them and letting the magic of animal communication into their lives. For more information on animal communication, you can contact me through this site.

“Animals in Spirit” by Penelope Smith

I am not around right now. But you can send us an email and we'll get back to you, asap.